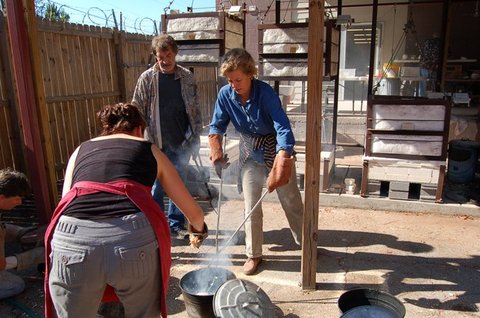 Most ceramics are fired according to the classic pattern. At first the glaze is applied to a clay object. This object is placed into a ceramic kiln, and fired rather slowly, untill the glaze has reached the melting point somewhere between 1050 and 1300 degrees Celsius. After a short period of maintaining this top temperature, the kiln is allowed to cool off very slowly.

The kiln is opened when temperature has dropped to 100 degrees Celsius or lower. As a result a shiny equal glaze covers the surface, and hides the clay underneath.

In this firing technique, the glaze is not allowed to cool. After applying the glaze, the kiln is fired quite rapidly to the melting point of the glaze that is usually quite low, around 850 to 900 degrees Celsius. Then the object is removed from the kiln with tongs, and allowed to cool off in the open air, or it is quenched in water. Because of the temperature shock, the molten glaze will pass very quickly from the state of melted, liquid glass to a solid state. As a result, the glaze will shrink much quicker than the clayobject underneath, and the glaze will "crack", and create a pattern of irregular lines called ‘cracquelé’. The clay used for this technique is also different: in order to be able to withstand the temperature shock, the clay must contain some materials which make it porous and more fire-proof: sand, grog, fireclay, talc, molochite, etc.... Japanese Raku dates back to the 15th-16th Century, where it could develop itself during more than 400 years. In the beginning it was mainly used to produce drinking cups for the Japanese tea ceremony. Tannine, a dark colourant found in tea, filled up the cracks, so that a more profound crackle pattern developed when the drinking cups were used regularly. Raku was also related to the zen philosophy. Bernard Leach, a famous potter from the United Kingdom, studied the technique for many years, and introduced it in Europe around 1911. He continued to use the pure Japanese technique.

Later on Raku crossed the Ocean, and was further developped by USA ceramic artists like Paul Soldner and Hal Riegger, who started experimenting on this technique. They added the element of secondary reduction. When the glaze has melted, the objects are also removed with tongs from the kiln, and quickly transferred into some kind of smoke-bin, containing burnable material like sawdust, woodchips, straw, leaves, etc... The smoke-bin is closed, and the smoke and tar, produced by the contact of the hot object with the burnable materials, penetrate through the cracks and leave a pattern of black cracks in the white glaze. There is also the possibility of creating special colour effects by adding oxides (mostly copper) to the glaze, or spraying the hot melted glaze with colour-changing substances (silver nitrate, etc...)

This technique was derived from Raku, but without the use of glaze. Basically the clay is polished when it is leather hard, and the clay object is biscuit fired. Then follows a layer of very thick slip, and the object is fired in a Raku kiln until the desired temperature is reached. When ready, the pieces are removed with tongs, placed in a smoke bin, and allowed to cool off. Sometimes, the slip comes off quite easily, sometimes it has to be removed using plenty of water. Various shades of white, black and grey can be achieved by varying the composition, applying method, and thickness of this slip.

Naked Raku is another variety of Raku, it differs only slightly from the slip resist raku. In this technique, a layer of raku glaze is added on top of a very thin slip. The slip acts like a kind of separation layer between the clay and the glaze, and prevents the glaze from melting to the surface of the clay object. The kiln is fired to a temperature of approximately 775 degrees Celsius (approximately 1450 Fahrenheit), untill the glaze starts to bubble. At this stage, the surface of the glaze is called “orange peel”. This process must be visually watched through a peephole in the kiln. After a short period of soaking, all objects are removed from the kiln by tongs and placed in a smoke bin. When the hot clayobject is reduced in the smoke bin, the smoke and tar fumes will penetrate into the cracks of the glaze, and go right through the slip layer into the clay, leaving behind irregular cracklike patterns on the surface. The layer of slip and glaze will then be peeled off, or has to be removed with water, showing the patterns created on the bare or nude clay, hence the name ‘Naked’. There are various colour possibilities by applying a slip layer containing stains or oxides before polishing, or by using coloured clay. On those parts where no glaze is applied on top of the slip layer, the clay turns black. After thoroughly cleaning and drying, a tiny layer of bees wax is polished into the finished clay object. This gives a matt shiny finish, embellishing the surface of the naked clay.